Strong commitment to art and culture

Bregenz, 20.7.21. The Festspielhaus and the lake stage in Bregenz will undergo comprehensive modernisation at a cost of approx. 60.5 million euros. Included in the renovation programme – to be completed by 2024 – is the building of an annexe. The negotiated agreement on how the costs are to be shared was officially signed on Tuesday (20 July) in the Lake Foyer of the Festspielhaus by Federal Chancellor Sebastian Kurz and the State Governor of Vorarlberg Markus Wallner along with Secretary of State for Arts and Culture Andrea Mayer, mayor of Bregenz Michael Ritsch, and president of the festival Hans-Peter Metzler. The signatories were unanimous that the project demonstrated a “strong commitment to the arts and culture in a financially challenging time”. The agreement on the financing was preceded by constructive and fair talks held between partners on an equal footing, said the Vorarlberg premier Wallner, who was explicit in his gratitude towards the federal government, in particular Finance Minister Gernot Blümel.

Speaking at the signing of the agreement, Federal Chancellor Sebastian Kurz noted that people working in the country’s arts and culture sector had gone through difficult months because of the Corona pandemic. Significant relief especially for the arts and culture sector had now been provided by the gradual easing of restrictions. In this connection Kurz drew attention to the support already made available for creative and performing artists and for cultural institutions that suffered particularly badly during the pandemic. The Chancellor emphasised the enormous importance of the arts and culture to society and the country as a whole. The federal government is contributing the biggest share – 22 million euros – to the large-scale modernisation project, officially entitled Renovation and Extension of the Festspielhaus and the Lake Stage. “The Bregenz Festival is a cultural landmark on Lake Constance. It is an important catalyst for Vorarlberg and the entire region. This, therefore, is much more than an investment in a top cultural attraction,” the Federal Chancellor declared.

Modern infrastructure
Art and culture require a proper setting if they are to have a positive influence on the inner cohesiveness of a community, stated Markus Wallner, premier of Vorarlberg: “Part of that is a modern infrastructure.” He said the agreement sends out an “impressive signal for Vorarlberg as an arts and culture location that is well regarded internationally”. At the same time it is tremendous recognition of the work that has been achieved in years gone by at the Bregenz location by the festival as an enterprise, Wallner noted with satisfaction. The momentum provided by the multi-million euro investment in what is still a very challenging climate because of the pandemic will be felt far beyond the cultural sector, said Wallner emphatically. For him the art and culture of a region is a reflection of the quality of life there and the quality of the location in general. The state of Vorarlberg is contributing a sum of approx. 19.25 million euros to the project. “Nothing stands in the way now of implementation at the earliest possible date,” Wallner said.

The international appeal of the Bregenz Festival as well as its widespread impact in Austria itself was referred to in remarks delivered by Andrea Mayer, Secretary of State for Arts and Culture. With its long tradition and its spectacular productions on the lake stage, the festival is a magnet for opera fans from all over the world, but also for people who are otherwise not necessarily close to the genre. “It’s the mixture of the startling stage sets, the natural setting, the atmosphere and the always impressive productions that make the Bregenz Festival a total art work,” Mayer said. The federal government had put concrete measures in place specifically for the cultural sector during the pandemic, proving what a high value was attached to art and culture in Austria. Mayer added that the federal government was fully behind public funding for this sector – “and not just because of the effects on tourism and the economy, but also because art is a thing of value in itself”.

The mayor of Bregenz, Michael Ritsch, pointed out that the success of the Bregenz Festival rested on the perfect interplay of the three venues: the lake stage, the Great Hall and the Workshop Theatre. “That’s why we see it as particularly important to take this step in the festival’s anniversary year,” Ritsch said. Even though the capital of Vorarlberg with its 30,000 inhabitants is not a big city, it has international calibre with the programme of the festival attracting well over 200,000 visitors every year. The town of Bregenz will contribute a total of 13.75 million euros to the major modernisation project.

Important milestone
At the signing of the agreement the president of the Bregenz Festival Hans-Peter Metzler noted that the “broad consensus on the need for a third construction phase was the basis for the goal-oriented, successful negotiations”. He expressed his great appreciation for all the financing partners. He recalled the painful cancellation of the festival the previous year, the first time since 1946. By working together it had been possible to get through the difficult phase. The Bregenz Festival itself will contribute 5.5 million euros towards the cost of the project.

Third stage of renovation and enlargement
The construction project is the third stage of renovation and enlargement of the festival site and its facilities. The Workshop Theatre will be completely modernised and an annexe will be built onto it. In the outdoor area the auditorium, built in 1978, will also be renovated, as will other facilities in the periphery of the lake stage. The building fabric of the Festspielhaus – built in the years 1978 to 1980 – is now showing its age. The Workshop Theatre along with the Lake Foyer, the Lake Studio and the administrative wing were all built in 1995 to 1997. The main building of the festival and congress centre was remodelled in 2005/06.

The Festspielhaus is one of the biggest cultural centres in the Lake Constance region. Additionally it has established an excellent reputation as a conference centre. Outside the festival season, the many events hosted by Kongresskultur Bregenz attract a further 200,000 visitors annually.

(Issued by the Vorarlberg press office, Secretariat of the State Government of Vorarlberg) 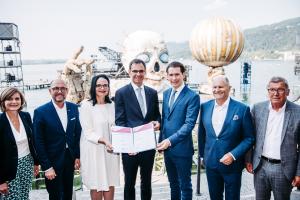