Varied programme for the 2021 festival jubilee

Bregenz, 28.4.21. A spectacular crowd-pleaser on the lake, ancient history on stage at the Festspielhaus, epoch-making orchestral works, and intriguing insights into the process of creating music theatre: the Bregenz Festival in its 75th jubilee season presents a kaleidoscope of events with familiar favourites and much that’s new. The curtain goes up on 21 July 2021 and the final performance is on 22 August.

After the festival in summer 2020 was cancelled due to Covid-19 related measures, the Bregenz Festival is currently planning this summer’s festival. It has been possible to reschedule much of the programme for 2021, including the opera on the lake stage, Rigoletto, and the opera at the Festspielhaus, Nero. It’s with the latter production that the 75th Bregenz Festival will open on 21 July. In August, in place of the regular 2020 programme, the Bregenz Festival mounted a reduced, eight-day series of events called Festtage im Festspielhaus. The opera originally planned for the lake stage in 2021 and 2022, Madama Butterfly, has been put back to 2022 and 2023.

28 performances of Rigoletto
A production as spectacular as it is moving, with ingeniously engineered spaces for intimate scenes and the stage effects of a big show, where the elaborate stage technology is all the time at the service of the artistic idea: the opera Rigoletto was put on at the festival for the first time in 2019 and returns to the Bregenz lake stage this summer for its second run after a delay of one year. Currently the Rigoletto clown is being roused from his winter sleep and made ready for the first night on 22 July.

Guiseppe Verdi's opera – directed by Philipp Stölzl – will be performed 28 times in the 2021 season. In total approx. 202,000 are available (including the dress rehearsal and crossculture night). The Vienna Symphony Orchestra will be conducted by Julia Jones – the first time a woman has stood at the rostrum for the lake stage production. At present, about 150,000 tickets to Rigoletto have been booked.

In all, around 230,000 tickets are available for Bregenz Festival events in this jubilee season. The actual seating capacity in the auditorium and all other venues of course depends on the Covid-19 regulations that apply in July and August 2021.

Festival president: Optimism and confidence
“We look forward to the year ahead and to next summer’s festival with optimism and confidence. We have a wide-ranging, highly varied and inspiring programme to delight our visitors in the jubilee year. My thanks go to the artists, our audience, the staff and everyone else involved, as well as our partners for holding out together throughout this challenging time,” says president of the festival Hans-Peter Metzler.

“75 years of the Bregenz Festival mean at the same time a 75 year collaboration with the Vienna Symphony Orchestra, which will be performing under its new chief conductor Andrés Orozco-Estrada. And that’s why two concerts by ‘our’ orchestra will take centre stage in the jubilee year. Richard Wagner’s The Rhinegold as a hommage to Lake Constance, which the Rhine not only flows through but also inspires and revitalises. This special concert will be presented in a semi-staged version by Johannes Erath. Also on the programme is Joseph Haydn’s oratorio The Creation, with the Bregenz Festival Chorus, the Kornmarkt Chorus and other singers from the local area. This strong anchoring in the region and connection with the performers – even though we have a big international audience – is what gives the festival its special power. If you look at the programme for 2021, you’ll discover other very special events,” says the festival’s artistic director Elisabeth Sobotka.

The Commercial Director Michael Diem adds: “Thanks to the overwhelming number of customers exchanging their bookings from 2020 to the 2021 festival season, and thanks to our sponsors’ loyalty and the reliability of the subsidising organisations, the Bregenz Festival has been able to put together one of the most wide-ranging programmes for its 75th birthday.”

Olivier Tambosi to direct Nero
The indoor venue, the Festspielhaus, will present opulent music theatre on an ancient historical subject: the Roman emperor Nero will tread the boards as an enigmatic, unsavoury character in the eponymous opera by Arrigo Boito. The opera, which was posthumously premiered in 1924 at La Scala Milan, will open the 75th Bregenz Festival on 21 July. Boito's libretti – for instance for Giuseppe Verdi's Otello and Falstaff – are among the outstanding achievements of operatic history. Boito also wrote the libretto for Franco Faccio's opera Hamlet, which was performed at the 2016 festival in a production by Olivier Tambosi. Tambosi will now be returning to direct Nero, with Dirk Kaftan conducting the Vienna Symphony Orchestra.

Welcome Andrés Orozco-Estrada and Leo McFall!
Since the festival was founded in 1946 the Vienna Symphony Orchestra has come to play in Bregenz every summer. In this jubilee year the top-league orchestra performs two epoch-making works: Joseph Haydn’s The Creation and Richard Wagner’s The Rhinegold, the latter semi-staged by the director Johannes Erath. In both concerts the orchestra will be under the baton of its new chief conductor Andrés Orozco-Estrada. Making his Bregenz debut Israeli conductor Omer Meir Wellber will present orchestral pieces that received their world premiere 75 years ago, including works by Richard Strauss and Charles Ives. He will also conduct Anton Bruckner’s Symphony No. 6 in A.

A new chief conductor will also be on the rostrum of the Vorarlberg Symphony Orchestra. Leo McFall will make his debut at the Bregenz Festival with a programme including the most recent orchestral composition by Thomas Larcher, who in 2019 was awarded the prestigious Grand Austrian State Prize.

Triple bill at the Kornmarkt, first co-production with Theater Kosmos
The Kornmarkttheater will be the venue of three very different events at the next festival. In the sixth year of its existence the Bregenz Opera Studio will stage L’italiana in Algieri, a sparkling comedy Gioachino Rossini composed when he was only 21 years old. The work will be performed in the final week of the festival in a production by Brigitte Fassbaender, with Jonathan Brandani as conductor. The legendary Kammersängerin Fassbaender returns to coaching the young singers of the Opera Studio in a masterclass in July. In addition she will read from her biography on 7 August.

An event at the Kornmarktheater on 30 July entitled Beethoven goes Africa is a concert with theatre, featuring actors and puppets and lots of music: African traditionals, compositions by the Soweto String Quartet, Mango Groove, Zuko Samela and Ludwig van Beethoven, courtesy of the Bochabela String Orchestra & Friends. The scene is set in South Africa in the year 1975.

Two days after the festival opens the Kornmarkt will present a new production of Heinrich von Kleist's Michael Kohlhaas. A co-production with Deutsches Theater Berlin, the play will have three performances in Bregenz and will then premiere in Berlin on 30 October 2021. The piece will be staged by the multiple award winning director Andreas Kriegenburg and feature Max Simonischek in the title role.

The second spoken theatre production of the coming festival season is Bernhard Studlar’s Lohn der Nacht (“wages of the night”). The play has been named winner of the Austrian Theatre Alliance competition and will receive its world premiere at the Bregenz Festival. This is the festival’s first co-production with the Bregenz-based Theater Kosmos, where the show is to be staged. After Bregenz the play will be performed at the other Theatre Alliance venues around Austria.

Next Insight session for the opera Wind on 3 May
The first ever Insight session took place back in spring 2015 and enabled the general public to follow the creation of a new piece of music theatre. That inaugural work was then premiered in summer 2017. The Opera Workshop – initiated by artistic director Elisabeth Sobotka – is now helping to incubate a second work: Wind by the Vorarlberg-born composer Alexander Moosbrugger. The theatre space is being designed by Flaka Haliti. Production partners are the Kunsthaus Bregenz and the organ-building firm Rieger-Orgelbau. The next Insight session will take place on 3 May at 6 pm at the Kunsthaus Bregenz. The world premiere is scheduled for 19 August 2021 in the Workshop Theatre.

An international co-production will receive its first performance in Austria at the Workshop Theatre: Upload, an interdisciplinary film opera. In it the composer, librettist and director Michel van der Aa explores to what extent we may one day be able to carry on living after death by uploading our consciousness. The work was jointly commissioned by the co-production partners De Nederlandse Opera, Oper Köln, Park Avenue Armory (New York), Ensemble Musikfabrik Köln, and the doubleA Foundation.

Musik & Poesie
In the popular series Musik & Poesie, artists appearing in other events at this year’s festival perform in the Lake Studio on three evenings. Once again, chamber music and literature highlight often surprising aspects of the festival’s varied programme.

In addition the Lake Studio will be the venue of Ihr seid bereits eingeschifft ("You are embarked"), a new project created by Silvia Costa. This is a world premiere of Vorarlberg Landestheater, presented in co-production with the Bregenz Festival and in association with Kunsthaus Bregenz and vorarlberg museum.

Concert at the KUB, Franui at the Festspielhaus, and festival breakfasts
The concert at the Kunsthaus Bregenz on 10 August will feature music from the Renaissance, the early Baroque and the present day in keeping with the opera Wind which is to receive its world premiere at the Opera Workshop. In the Great Hall of the Festspielhaus, the Musicbanda Franui are putting on a show with the puppeteer Nikolaus Habjan. The soirée, entitled Alles nicht wahr, features songs by the Austrian cabarettist and composer Georg Kreisler. In addition, three festival breakfasts will again be arranged in association with the broadcaster ORF Vorarlberg and the Friends of the Bregenz Festival, offering a chance to get to know various artists performing at the festival.

Varied programme for kids and young adults
crossculture, aimed at kids and young adults and launched in 1996, again offers a wide range of creative activities connected to the themes of the 2021 Bregenz Festival programme. The high point as always is crossculture night, when more than 5,000 youngsters attend one of the final rehearsals on the lake stage. On 15 August there will be a matinee concert – Brass Eroico – with graduates of a wind band camp, the 5th International Blasmusik-Camp, conducted by Martin Kerschbaum. The instructors at the camp are members of the Vienna Symphony Orchestra. 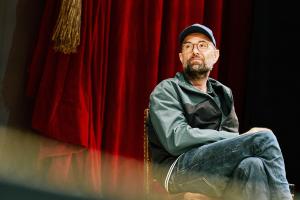 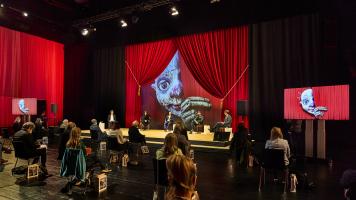 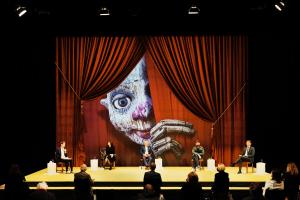 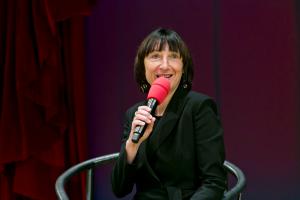