Bregenz, 20.8.21. The Bregenz Festival is rapidly approaching the end of its 75th anniversary season. The closing day is Sunday 22 August, by which time its audience figures will have reached an estimated 241,351.

Lakeside Rigoletto draws near-capacity crowd in second season
After an interval of one year necessitated by the corona pandemic, the Bregenz Festival brought Rigoletto back to the lake stage. This decision went down well with the festival audience. With tickets selling to 99% of capacity, the management were delighted by a successful second run for Philipp Stölzl’s production.

In all, there will have been a total of 28 performances of Giuseppe Verdi’s opera between 22 July and 22 August. The music director was Julia Jones, who conducted the Vienna Symphony Orchestra in alternation with Daniel Cohen.

The emperor in the Festspielhaus – Arrigo Boito’s Nero
The summer festival opened with a rarely performed work, Nero by the composer and librettist Arrigo Boito. The opera, about one of the most notorious figures in history, had a three-evening run in the Festspielhaus. Olivier Tambosi’s spectacular production was seen by 3,840 visitors, which corresponds to 83 percent capacity. The Vienna Symphony Orchestra was conducted by Dirk Kaftan, whose interpretation of the opera (premiered in 1924) met with a highly appreciative response from critics and audiences alike.

An innovative opera concept at the Bregenz Festival – the film opera Upload
An interdisciplinary film opera entitled Upload – an international co-production – received its first performance in Austria at the Werkstattbühne. In it the composer, librettist and director Michel van der Aa explores the question of uploading one’s consciousness in order to carry on living after death, and probes what implications that might have. The work was jointly commissioned by the co-production partners De Nederlandse Opera (Amsterdam), Oper Köln, Park Avenue Armory (New York), Ensemble Musikfabrik (Cologne) and the doubleA Foundation. The musically and emotionally thrilling opera experience was attended by 318 visitors at its two performances.

Theatre that raises many timeless questions – Kleist’s Michael Kohlhaas
In July, festival-goers were able to discover a new perspective on Heinrich von Kleist’s historical novella Michael Kohlhaas. The production by Andreas Kriegenburg eschewed the usual male-dominated reading of the tale. That was impeded by the presence on stage of two female characters. At the end the question at the forefront of everyone’s mind was why the women hadn’t been listened to earlier.

The play was performed at the Kornmarkt Theater on 23, 24 and 25 July and drew a total audience of 1,280, corresponding to 88 percent of capacity. The co-production with Deutsches Theater Berlin and Les Théâtres de la Ville de Luxembourg brought together a high-calibre ensemble on stage, which received positive reviews.

KCo-production with Theater KOSMOS – Bernhard Studlar’s play Lohn der Nacht
The latest play by the Vienna-born author Bernhard Studlar links up characters and places in a fast-paced, witty and surprising way. The play, Lohn der Nacht (“wages of the night”), was named winner of the Austrian Theatre Alliance competition and was very positively received in Bregenz, with 501 people coming to see it during its three-night run. The play will now go on to be performed at other Theatre Alliance venues.

A concert series embracing oratorio and symphony
The festival’s regular concert series opened on 26 July with Joseph Haydn’s oratorio The Creation played by the Vienna Symphony Orchestra under Andrés Orozco-Estrada. On 1 August the Bregenz Festival celebrated its 75th birthday with Richard Wagner’s The Rhinegold, given in a semi-staged version directed by Johannes Erath, with Andrés Orozco-Estrada conducting the Vienna Symphony Orchestra. Conductor Omer Meir Wellber made his Bregenz Festival debut on 8 August in a concert featuring Charles Ives’ The Unanswered Question and Anton Bruckner’s Sixth Symphony. The concert series was brought to a close on 22 August with the Austrian premiere of Thomas Larcher’s Symphony No. 3, performed by the Vorarlberg Symphony Orchestra under its new chief conductor Leo McFall. Come Sunday, an estimated 86 percent of the tickets to the orchestral concert series will have been sold.

A world premiere between dream and reality
A music theatre experience that has been in preparation since 2018 finally received its world premiere yesterday: Alexander Moosbrugger’s opera Wind, specially commissioned by the Bregenz Festival. The final two performances of the work can be seen today and tomorrow at the Werkstattbühne. Moosbrugger’s source of inspiration was the book Hypnerotomachia Poliphili, probably printed in 1499. The all-round audio-visual experience was presented in the Werkstattbühne in a performance space designed by artist Flaka Haliti with 172 organ pipes. The opera is more or less sold out and will be seen by an estimated 670 people.

Musik & Poesie, concert at the KUB, Franui at the Festspielhaus, and festival breakfasts
Chamber music and literature once again offered surprising new perspectives on the festival’s rich and varied programme. On three evenings the popular Musik & Poesie section staged events in the Lake Studio, which drew a total audience of 470. The Lake Studio was also the venue of Ihr seid bereits eingeschifft (“you are embarked”), a project created by Silvia Costa. This was a world premiere of the Vorarlberg Landestheater, presented in co-production with the Bregenz Festival and in association with Kunsthaus Bregenz and vorarlberg museum; it drew an audience of 287. The concert at the Kunsthaus Bregenz on 10 August featured music of the Renaissance, the early Baroque and the present day, and played to a capacity audience. The ensemble Musicbanda Franui returned to perform in the Great Hall of the Festspielhaus with the puppeteer Nikolaus Habjan. The soirée, entitled Alles nicht wahr, featured songs by the Austrian song writer Georg Kreisler; 92 percent of the tickets were sold. Brigitte Fassbaender presented her memoirs at a reading on 7 August. Once again this year there was an opportunity to meet artists appearing at the festival at three breakfasts and one workshop discussion hosted by the Friends of the Bregenz Festival in association with the broadcaster ORF Vorarlberg. The events were attended by a total of 350 visitors.

Varied creative programme for kids and young adults
Although crossculture, the programme for kids and young adults, could not take place to the full extent this year, a varied programme of creative activities was nevertheless able to give lots of kids and young adults an insight into the world of opera. As part of a visit to a closed rehearsal 1,553 youngsters aged from 14 to 26 were able to see for themselves preparations for the lake stage production of Rigoletto. The Children’s Festival was able to take place again this year as well. In the first week of the holidays, 100 kids breathed life into an adventure story. What they came up with in the course of one week of creative workshops in set and costume design, singing and dancing, was then presented for everyone to marvel at in a live-streamed performance at the end of the week. On 15 August there was additionally a matinee concert – Brass Eroico – with graduates of a wind band course, the 5th International Blasmusik-Camp. In all, 2,487 children and young adults took part in the crossculture programme of this year’s festival.

Preview of 2022: Madama Butterfly and Siberia
Next year the opera on the lake stage will be Giacomo Puccini’s Madama Butterfly, with a scheduled 25 performances. The Festspielhaus production is Siberia (1903) by Umberto Giordano. The paths of these two works actually crossed at their premieres well over a hundred years ago when Giordano’s verismo opera was performed instead of the postponed premiere of Butterfly at La Scala Milan. With a Russian-flavoured opera at the Festspielhaus, the musical journey to Russia at next year’s festival will continue in the orchestral concerts – alongside music by Richard Wagner and Ludwig van Beethoven, the programme will feature works by Russian composers like Peter Tchaikovsky and Dmitri Shostakovich.

Preview of 2024 and 2025
At the festival in summer 2024 and 2025, the lake stage production will be Der Freischütz by Carl Maria von Weber. The director and stage designer will be Philipp Stölzl. This will be the first production of the work – premiered in 1821 at the Berlin Schauspielhaus – on the Bregenz lake stage. The opera was performed at the Festspielhaus at the festival in 1983. 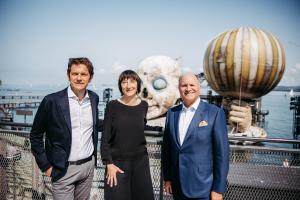 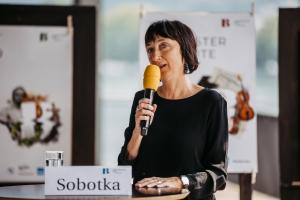 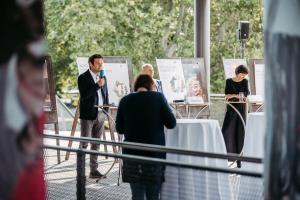 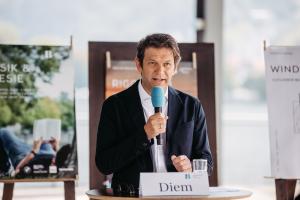 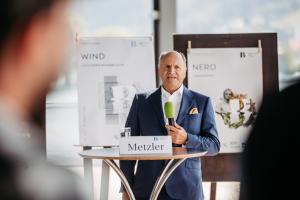 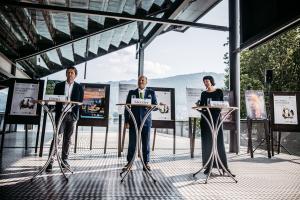 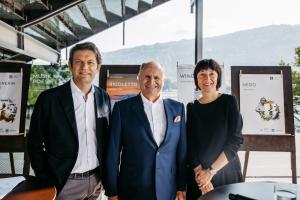