New chair of the Friends of the Festival: Judith Salzmann succeeds Gebhard Sagmeister

Bregenz, 12.11.21. The outgoing chair of the Friends of the Bregenz Festival, Gebhard Sagmeister, gave a speech at the general meeting in which he looked back on an extraordinary year. Because of the corona situation, most of the events organised for the Friends were not able to take place, but in spite of everything the membership remained stable at 1,075. The Friends of the Festival elected Judith Salzmann as the new chair; Sagmeister didn’t run for re-election.

“Thanks for many moments of happiness”
In his farewell speech before stepping down as chair of the association of Friends, Gebhard Sagmeister said: “Being the same age as the association, I will always remain closely connected with it. As the guardian of these values, of the tremendous idea that was born back then, I had to give a lot of thought to how to ensure the successful further development and the successful continued existence of this association. As the offspring of a classic farming family and a small business family, I know all about the importance of passing on handed-down values and tasks.” Sagmeister became a member of the Friends in 2002 and was elected chair in 2012. He said he now wanted to “place the association into younger hands”. Sagmeister expressed gratitude for many moments of happiness, adding that he hoped to remain closely connected with the Friends and the Bregenz Festival.

New chair elected
Judith Salzmann was unanimously elected as the new chair. Salzmann, a qualified engineer from Vorarlberg, is joint director and co-owner of a civil engineering firm based in Bregenz. “I know these are big shoes I’m putting on, and I’m looking forward to the challenge. We are going to make every effort to continue offering the members of the association great experiences,” she said. The following remain as members of the board: Joe Rupp (1st deputy), Cornelia Sinz-Rhomberg (treasurer), Verena Brunner-Loss and Stefan Aichbauer. Newly elected members of the board are Martin Wiesenegger (2nd deputy) and Irma Renner (secretary). In the supervisory committee, Hannes Arnold takes over from Thomas Hackspiel.

Solidarity in difficult times
After many events were cancelled due to the pandemic, 600 members of the association attended the Festtage im Festspielhaus (a short series of festival events in August 2020). The Friends once again put a sizeable sum at the festival’s disposal – more than 300,000 euros in 2020. The board of the Friends of the Bregenz Festival expressed its appreciation for the broad-based support and solidarity in difficult times.

Financial and non-material support
President of the Bregenz Festival, Hans-Peter Metzler, declared he was very happy that one of the most important, stable and reliable partners of the festival was and would remain in good hands. “I would like to thank you very, very much for the solidarity you have shown. You see the bond best when it’s under pressure. Thank you very much for the financial and also the non-material support on an unbelievably high level, even in these difficult times,” Metzler told the association. He ended his speech with words of gratitude directed at the outgoing chair, Gebhard Sagmeister: “Thanks for your unbelievable, personal commitment in recent years.”

A look ahead to the 2022 Festival
The high point of the evening was the presentation of the programme of the 2022 Bregenz Festival with the festival’s president Hans-Peter Metzler, artistic director Elisabeth Sobotka, commercial director Michael Diem, the director of Madama Butterfly Andreas Homoki, and the festival’s spokesperson Axel Renner.

The association of Friends of the Festival was established in 1949, three years after the festival itself. Many of the association’s founder members were involved in planning and implementing the inaugural Bregenz “Festwoche” (week-long festival) in 1946. Currently it has over 1,000 members. The Bregenz Festival Foundation, established in 2002, is the one hundred percent shareholder of Bregenzer Festspiele GmbH, a non-profit private limited company. The founders are the Friends of the Bregenz Festival, the Republic of Austria, the federal state of Vorarlberg and the municipality of Bregenz. 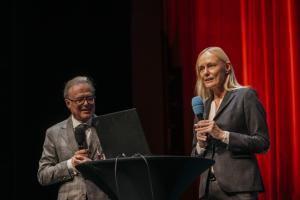 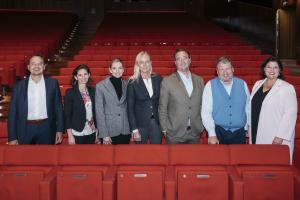 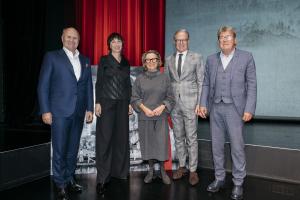 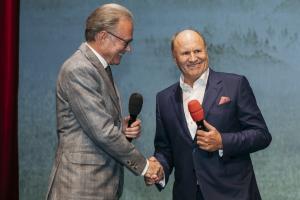 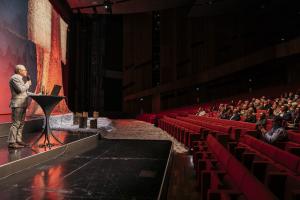