Bregenz, 13.5.22. The Advisory Board of the Bregenz Festival Foundation has confirmed the Executive Board in its current membership and unanimously elected it for another five-year term. Thus Hans-Peter Metzler remains at the helm of the cultural organisation until spring 2027, with Verena Brunner-Loss and Wilhelm Muzyczyn as vice-presidents, and Michael Grahammer and Sabine Haag as members of the board.

“I thank not only the Advisory Board for this vote of confidence, but also the entire Executive Board for cooperating successfully, which is a very good basis for the coming five years,” says Festival President Hans-Peter Metzler.

The Bregenz Festival Foundation, established in 2002, is the one hundred percent shareholder in the private limited company Bregenzer Festspiele GmbH, organiser of the annual summer Bregenz Festival. The founders are the Friends of Bregenz Festival, the Republic of Austria, the federal state of Vorarlberg and the municipality of Bregenz. Each founder appoints two members to the Advisory Board, which appoints the members of the Executive Board of the Foundation. The Executive Board for its part appoints a chair – the festival president. 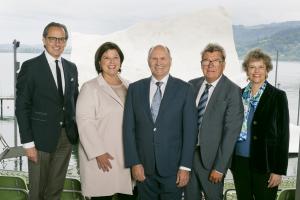