TWO REASONS TO CELEBRATE FOR THE BREGENZ FESTIVAL

Madrid/Bregenz, 29 Nov. 2022. The Bregenz Festival has two reasons to celebrate. At the International Opera Awards ceremony the prize for best designer went to Michael Levine, creator of the set for the lake stage production of Madame Butterfly. In the Digital Opera category the winner was Michel van der Aa’s film opera Upload at Dutch National Opera, which was a co-production with the Bregenz Festival and received its premiere at the Workshop Theatre in 2021.

The winners were announced yesterday evening in Madrid by the London-based Opera magazine. Conferred in 16 categories, the awards were decided on by a jury of respected opera critics, culture managers and artists from 20 countries – except for the Opera magazine readers’ award. The awards aim to recognise excellence in opera.

“We are delighted by the awards for Michael Levine – set designer of our fantastic and hugely popular Madame Butterfly on the lake stage – and for the forward-looking opera project Upload, which was premiered at the Bregenz Festival. The two productions demonstrate the enormous artistic breadth of this unique festival,” said artistic director Elisabeth Sobotka.

Elisabeth Sobotka offered her congratulations to the winners in the other categories, especially to the opera houses and ballet theatres of Lviv and Odessa. The two companies were honoured at the ceremony in acknowledgement of “the courage and resilience shown by the Ukrainians in continuing to perform in spite of the war”.

The nominees for the 2022 International Opera Awards came from over 30 countries. Bregenz’s Madame Butterfly was also nominated as Best New Production, but the prize went to the Glyndebourne festival in East Sussex, Great Britain for the double bill La Voix humaine/Les Mamelles de Tirésias.

This year the International Opera Awards ceremony was held in the Teatro Real in Madrid. It is the first time that the gala did not take place in the United Kingdom, the organisers stated. The Teatro Real was named Opera Company of the Year in 2021. Due the pandemic, the awards ceremony took place online in 2021 and had to be cancelled altogether in 2020. 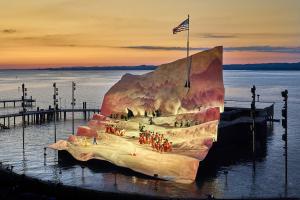