Emotion instead of spectacle at this year´s Bregenz Festival

Artistic Director Sobotka before Madame Butterfly premiere: “What the lake can do is magnify emotions” – some 75 Percent of tickets already sold

Vienna/Bregenz, 2.6.22. Japan and Siberia lend a distinctly international flavour to the programme of this summer’s Bregenz Festival, which has just been presented in Vienna. Puccini’s Madame Butterfly is the opera on the lake stage, inaugurating the 2022 season on 20 July, with Umberto Giordano’s Siberia premiering at the Festspielhaus the following day. Above all Madame Butterfly – in a production by Andreas Homoki – will primarily be about one thing: emotion, as artistic director Elisabeth Sobotka stressed at a press conference in the Austrian capital.

“We don’t need a work for great masses of people where a lot happens. What the lake can do is magnify emotions,” Sobotka said, explaining her decision to bring Puccini’s classic opera to the Bregenz lake stage, where it will run for 26 performances in its first season. The principal element of the set is what looks like a giant piece of paper, measuring 1,340 square metres. “It underlines the solitude of Butterfly very powerfully, movingly and magically,” said Sobotka, visibly impressed by the stage designed for the “big screen music” of Madame Butterfly – for the Bregenz production of which the unusual German title of Madame Butterfly has been chosen instead of the original Madama Butterfly. The production concept is therefore completely different to that of the recent Rigoletto, a runaway success that offered technological spectacle and sold out the lake stage auditorium. “That will puzzle some people and delight others,” she said.

Beside Madame Butterfly, another female figure caught up in a tragic drama can be seen in Umberto Giordano’s late verismo work Siberia, which is to be staged at the Festspielhaus this summer. The production has an all-Russian leading team – director Vasily Barkhatov and conductor Valentin Uryupin. The festival stands by this decision, Sobotka emphasised, adding that the Russians who wanted to work in the arts in the West are overwhelmingly supporters of democracy and against Russia’s war of aggression in Ukraine. “We have to be very careful not to interrupt communications here,” she said. The very contemporary interpretation that Barkhatov has opted for, where the story is told from the viewpoint of someone looking for traces of their parents in the Gulag, certainly takes on a completely new meaning in view of world events, Sobotka added.

Hopefully a less tragic female fate awaits Elisabeth Sobotka when she leaves the festival after the summer season of 2024 to take up the artistic directorship of the Staatsoper Unter den Linden in Berlin. Sobotka’s imminent departure does somewhat restrict her creative leeway at the festival, as she noted at the press conference on Thursday: “New inventions are no longer possible.” On the other hand the festival has been significantly enlarged in recent years, she pointed out, and it will continue on that path. This includes for instance the Opera Workshop, at which a new work is to be premiered in 2024 under David Pountney’s direction and in association with Kunsthaus Bregenz.

While the artistic director departs from the festival in 2024, there’s continuity on the conductor’s podium. The Italian maestro Enrique Mazzola has been appointed Conductor in Residence and will conduct not only this year’s Madame Butterfly and next year’s Festspielhaus production but also the lake stage opera of 2024, Carl Maria von Weber’s Der Freischütz, to be directed by Philipp Stölzl. “I know that’s going to be a genuine challenge, but that’s exactly what appealed to me,” Mazzola said, looking forward to his new role.

In Bregenz this year, optimism can be felt on all sides – and that’s true also of the commercial director Michael Diem, who is responsible for an annual budget of around 27 million euros. “In total we’re a good 75 percent sold out. If it carries on like this, capacity utilisation will be at a very, very nice rate.” The number of tickets on sale for Madame Butterfly alone is 189,000 and the festival anticipates total audience figures of about 230,000. 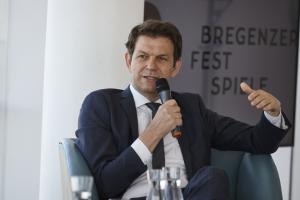 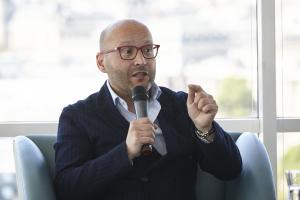 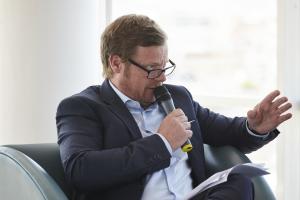 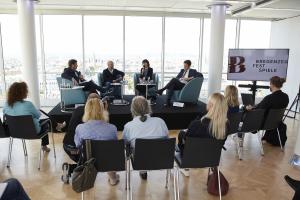