Associaton of Friends raises €316,000 for the Festival

Bregenz, 28.4.22. The Friends of the Bregenz Festival have once more contributed a considerable sum of money to the festival programme. At the association's general meeting the chairperson Judith Salzmann announced the transfer of over 316,000 euros to the Bregenz Festival.

A festival with an appeal that reaches far beyond state borders
Since it was founded more than 70 years ago, the association of Friends has been amongst the most important patrons of the festival at Bregenz, supporting it financially as well as in non-material ways. Chairperson Judith Salzmann underlined the importance of the Friends of the Bregenz Festival as a reliable partner. She expressed her gratitude to the members of the board and the association members themselves, and also thanked the Bregenz Festival team led by the artistic director Elisabeth Sobotka and the commercial director Michael Diem.

Coveted special events
Members of the association enjoy a number of benefits, including priority booking for festival tickets. While 2021 was affected by the pandemic, which meant that no social events were possible, Salzmann promised a “colourful bouquet of events” for 2022 as a way of offering insights into the Bregenz Festival. 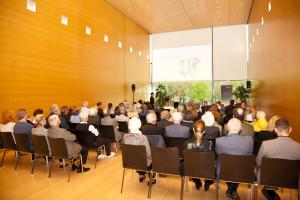